"A single moment of tribulation assures an immense
weight of glory. Never to suffer would be
the greatest danger for us." - St Paul of the Cross “May these my grandchildren, to whom I have given the best
of my heart, have a long and happy life, but if on some painful day, sickness or the loss of a loved one fills you with grief,
remember that a sigh before the Tabernacle,
where the greatest and most august martyr resides,
and a gaze at Mary at the foot of the Cross, can make a drop
of balm fall on the deepest and most painful wounds.”
Posted by Janette at 4:45 AM No comments:

"God has placed us all in a dark room, hoping that we will have
sense enough to turn the light on... " - Mother Angelica "There are two things I want you to do -
keep close to Our Lord in the Holy Eucharist...
(and) stay close to His Mother.

With those two loves, you will always have
the light to see what is right and what is wrong." 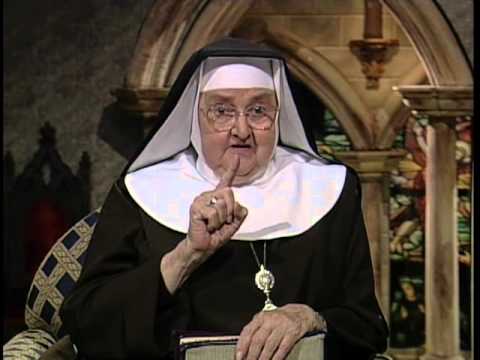 "We are called to be great saints,
don't miss the opportunity." - Mother Angelica

Related:
Let go of 'false lights' that lead down the wrong path, Pope says :: Catholic News  Agency (CNA)
18 Mother Angelica Quotes that Hit It Right on the Nose | ChurchPOP
Posted by Janette at 4:45 AM No comments:

For love of priests and of holy Mass...

"We are born to love, we live to love,
and we will die to love still more." - St. Joseph Cafasso "March 26th is one of two days the One, Holy, Catholic, and  honors a Pearl of Our Lady's Dowry. The Church chose this day, as it was the first available. In reality, she was put to death on quite a momentous day. Not only was it March 25th - the date that the Feast of the Annunication is normally celebrated, but in the year that she died, 1586, this date was also Good Friday. She followed in  her dear Saviour's footsteps so closely that she died in a cruciform position, her hands and arms outstretched and bound to the floor on which she would be crushed. After having been secured in the cruciform position mentioned before, in imitation of Christ, the martyr was crushed to death by several hundred pounds of weights that were laid on top of her. She was not the only victim of the execution. She had been four months pregnant.

St. Margaret opened her home to the most reviled class of people in Elizabethan England - Catholic priests. "This is a war and a trial in God's Church," she wrote of the persecution in her country. "Therefore, if I cannot do my duty without peril and dangers, yet by God's grace I will not be a slacker for them. If God's priests dare venture themselves to my house, I will never refuse them."

One biographer wrote, "The heart and center of [St. Margaret's] life was the " One priest that she harbored, Father John Mush, wrote, "Her most delight was to kneel where she might continually behold the Blessed Sacrament."

"I die for the love of my Lord Jesu."- St Margaret Clitherow
Moved by her saintly life, all her children entered the religious life.
Anne became a nun. Henry and William both became priests.

That generous word "Be it done"...

The ANNUNCIATION of the LORD

"The Virgin Mary uttered that generous word, "Be it done"
... Immediately the Heart of Jesus, ever to be adored,
has begun to pulsate with love, divine and human."
Pius XII, On Devotion to the Sacred Heart of Jesus, 63 "The Wisdom of God creates poets. How evidently this is so can be seen by considering Mary of . When she had given to the Lord of Hosts the Flesh that would become our Bread, Wisdom caused her to break into a poem of praise, a song repeated by more people than probably any other ever composed. The Presence within stirred her to exult and proclaim the One 'who has filled the hungry with good things'. And the praise owed to the Presence of embodied Wisdom among us has never ceased in the Church from that day until this."
James T. O'Connor
The Hidden Manna

“When the Divine Child was conceived, Mary’s humanity gave Him hands and feet, eyes and ears, and a body with which to suffer. Just as the petals of a rose after a dew close on the dew as if to absorb its energies, so too Mary as the Mystical Rose closed upon Him Whom the Old Testament had described as a dew descending upon the earth. When finally she did give Him birth, it was as if a great ciborium had opened, and she was holding in her fingers the Guest Who was also the Host of the world, as if to say, ‘Look, this is the Lamb of God; look, this is He Who takes away the sins of the world.’”

Virtual Masses available through many, many parishes.
https://mass-online.org/daily-holy-mass-live-online/