He provides, we trust...

"Catch, then, O catch the transient hour;
Improve each moment as it flies!" - St. Jerome "If Christ did not want to dismiss the Jews
without food in the desert for fear
that they would collapse on the way,
it was to teach us that it is
dangerous to try to get to heaven
without the Bread of Heaven." - St Jerome

St Jerome, pray for us!
Posted by Janette at 4:45 AM No comments:

Priesthood Sunday: 29 Sept 2019
A special day set aside to honor the priesthood in the United States...
to reflect upon and affirm the role of the priesthood
in the life of the Church as a central one.
Note:  Parishes may choose to celebrate Priesthood Sunday on another Sunday when convenient.
This nationwide event is coordinated and sponsored by the US Council of Serra International.

Christ daily comes to us in humble form;
daily He comes down
from the bosom of the Father
upon the altar
in the hands of the priest."

Going to Jesus from Jesus...

St Vincent de Paul was praying before the Eucharist one time and,
after a man told him about a poor person on the street needing help,
Vincent said:
"I am going to Jesus from Jesus." 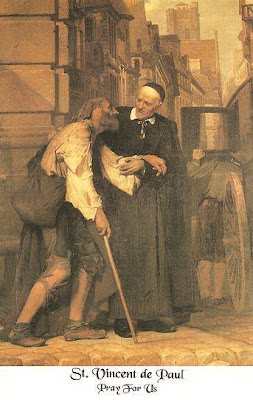 "We should take as a maxim never to be surprised at current difficulties,
no more than at a passing breeze, because with a little patience
we shall see them disappear. Time changes everything."

St Vincent de Paul, pray for us!
Posted by Janette at 4:45 AM No comments:

Linked in life and in death...

Cosmas and Damian are two of the martyrs included in the ancient Roman Canon (Eucharistic Prayer I).    Prayer before the Consecration:

In communion with those whose memory we venerate, especially the glorious ever-Virgin Mary, Mother of our God and Lord, Jesus Christ, + and blessed Joseph, her Spouse, your blessed Apostles and Martyrs, Peter and Paul, Andrew, James, John, Thomas, James, Philip, Bartholomew, Matthew, Simon and Jude; Linus, Cletus, Clement, Sixtus, Cornelius, Cyprian, Lawrence, Chrysogonus, John and Paul, Cosmas and Damian and all your saints; we ask that through their merits and prayers, in all things we may be defended by your protecting help. Through Christ our Lord. Amen. 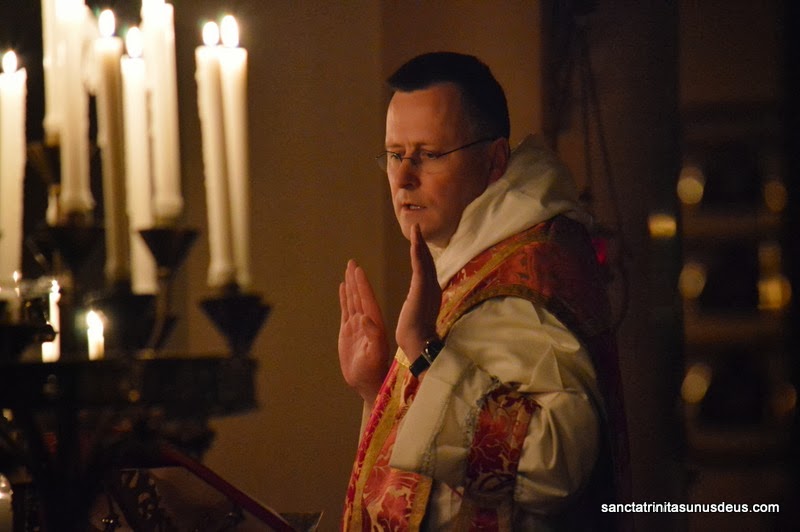 "It is beautiful to think that although we hardly know anything of these saints' lives on earth, we are forever recalling these glorious martyrs at the Supper of the Lamb. While we may not have intimate portrayals of their human lives, we do know these saints very intimately. How can we not, when you are together at the heavenly meal every week? Sharing meals together, seated around the same table provides closeness and intimacy, and that is what we are doing together at every Mass. They are part of our family, and the witnesses of the Heavenly Banquet "who had been slain for the Word of God and for the witness they had borne" (Rev. 6:9). This excerpt from the Dogmatic Constitution of the Church reinforce this view of the Liturgy and our connection with the martyrs:

Our union with the Church in heaven is put into effect in its noblest manner especially in the sacred Liturgy, wherein the power of the Holy Spirit acts upon us through sacramental signs. Then, with combined rejoicing we celebrate together the praise of the divine majesty; then all those from every tribe and tongue and people and nation who have been redeemed by the blood of Christ and gathered together into one Church, with one song of praise magnify the one and triune God. Celebrating the Eucharistic sacrifice therefore, we are most closely united to the Church in heaven in communion with and venerating the memory first of all of the glorious ever-Virgin Mary, of Blessed Joseph and the blessed apostles and martyrs and of all the saints (Lumen Gentium, 50d).

It is through the blood of the martyrs that the Church expanded and continues to grow. What a blessing to have this intimate connection with the roll call of martyrs at the Roman Canon. We are continually reminded of belonging and participating in the family of Christ. Let us remember to invoke these blessed martyrs today, and all the saints of the Canon so that  in our death we may join our brothers and sisters in the Heavenly Supper of the Lamb."

Sts Cosmas and Damian performing a miraculous cure by transplantation of a leg. Oil painting attributed to the Master of Los Balbases, ca. 1495.

St Cosmas and St Damian
Nee: Arabia
Died: c 287 (Syria)
Twin brothers, physicians
Practiced medicine without charge
Worked together in life, together in martyrdom, together in eternity
Patron of Doctors (along with St Luke) and pharmacists
Feast Day - September 26

Sts Cosmas and Damian, pray for us!
Posted by Janette at 4:45 AM No comments: "There is nothing littler, meeker or more silent
than Christ present in the Host.
This little piece of bread embodies the humility and perfect silence of God,
His tenderness and His love for us.

If we want to grow and
to be filled with the love of God,
it is necessary to plant our life firmly on three great realities:
the Cross, the Host, and the Virgin:
crux, hostia, et virgo. ...
These are three mysteries that God gave to the world in order to
structure, fructify, and sanctify our interior life and lead us to Jesus.
These three mysteries are to be contemplated in silence."

Painting: The Virgin with the Host ~ Jean Auguste-Dominique Ingres, 1860, France
Posted by Janette at 4:45 AM No comments:

All things made new...

He who was seated on the throne said, "I am making everything new!"
Then he said, "Write this down, for these words
are trustworthy and true." - Rev 21:5 During a visit to the Philippines, Sister Gertrude from the Sacred Hearts Community
in Hawaii relayed this story (when she was over seventy) to Msgr Josefino (Pepe)
Ramirez.  He passes it on in a Chapter of his book, Letters to a Brother Priest:

"When (Sr Gertrude) was a young nun, one of the old nuns was dying. The custom at that time was for the community to gather in prayer around the one dying.  ... the nun was breathing her last breaths.  Suddenly, she opened her eyes, stretched forth her arms and exclaimed: "O my Beloved."

Then she sat up and gazed lovingly at the Blessed Sacrament,which she had permission to have in her room since she had been too weak to go to the chapel. What happened next had never been told, until Sister Gertrude shared it with me.   The old, wrinkled nun changed to a strikingly attractive young woman, radiantly aglow with a countenance that put the rest of the nuns into ecstasy just looking at her. After what seemed like a minute or two, the transformed nun went back against her pillow, turning old again and died.  When the Sisters came out of their ecstasy, they were stunned to discover that this extraordinary event lasted for more than one or two minutes. The Sisters were in ecstasy for over thirteen hours!

... If only we could see the change that takes place in us at each Holy Hour we make.  We are made new in the Eternal Youth of Christ.  We are made innocent, without blemish, as we are cleansed in His Precious Blood, in the folly of His surpassing love. "


Photo: University of Steubenville, Ohio
Posted by Janette at 4:45 AM No comments:

"Protected, covered and defended by the Presence of this dear Lord,
let us stand before Him in the Holy Eucharist
and pray with the humility of the creature
and the confidence and freedom of the child." - St Padre Pio

"We must always have courage,
and if some spiritual languor comes upon us,
let us run to the feet of Jesus in the Blessed Sacrament,
and let us place ourselves
in the midst of the heavenly perfumes,
and we will undoubtedly regain our strength."

When I am close to Jesus in the Blessed Sacrament,
I feel as if my heart is bursting out of my chest.” ~ St Padre Pio

St Padre Pio, pray for us!
Posted by Janette at 4:45 AM No comments:

"If we are to know the Lord, we must go to Him.
Listen to Him in silence before the Tabernacle
and approach Him in the Sacraments." - Pope Francis "Adore and visit Jesus, abandoned and
forsaken by men in His Sacrament of Love.
Man has time for everything
except for visits to His Lord and God, Who is waiting
and longing for us in the Blessed Sacrament.
The streets and places of entertainment
are filled with people;
the House of God is deserted.  Ah!  Poor Jesus..."

Painting: Morning News ~ Francis Luis Mora
Posted by Janette at 4:45 AM No comments:

Sharing in that saving JOY...

For I came not to call the righteous,
but sinners, says the Lord. - Matt 9:13

Sharing in that saving joy, O Lord,
with which Saint Matthew welcomed the Savior
as a guest in his home, we pray: grant that we may always
be renewed by the food we receive from Christ,
who came to call not the just, but sinners to salvation.
Who lives and reigns forever and ever.

St Matthew
Nee - Capernaum
"And he got up and followed Him" (Mt 9:9b) ...
"leaving everything behind" (Lk 5:28)
Apostle and Evangelist
"the son of Alphaeus" (Mk 2:14)
Symbols associated w/St Matthew:
Gospel, human/angel, sword (in re: martyrdom)
Feast Day - September 21

Painting above: The Calling of Matthew - Caravaggio

Imitate St Matthew - get up and follow Jesus.
Then invite sinners to meet Him.
"What reason can the Teacher have for eating with tax collectors
and those who disregard the law?" —Matthew 9:11
Cause heaven to rejoice (Luke 15:7). 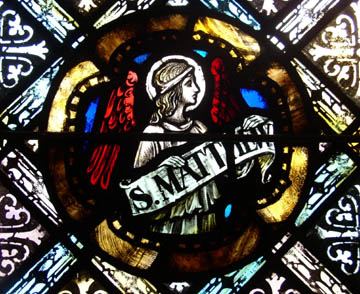 His life is somewhat shrouded, and  ... There are not many facts ... But Matthew was a publican ... Who gathered in the tax ... Until that wondrous moment in ... His native Galilee ... When Jesus came upon him, and ... He told him, "Follow me" ... And Matthew followed Jesus then  ... Wherever Jesus went ... Ignoring Pharisees and all ... The Roman government ... With eloquent sincerity ... This good apostle preached ... In distant lands wherever there ... Were souls that could be reached ... And he composed the gospel that ... Inspires us today ... To follow Jesus Christ and live ... According to His way.
From Poem Portraits of the Saints - James J Metcalfe (1956), pg 6

St Matthew, pray for us!
Posted by Janette at 4:45 AM No comments:

For with you is the fountain of life; in your light
we see light. - Psalm 36:9 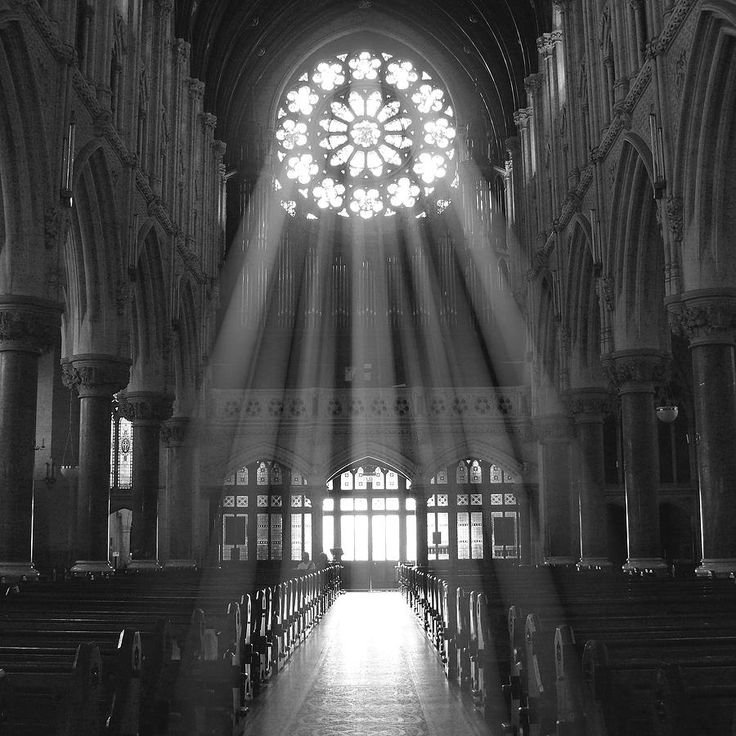 Surely, among other things,
that the Blessed Sacrament should be to us just
the single overpowering fact of the world.

Our hands hold Him;
our words make Him;
our tongue rests Him;
our body compasses Him;
our souls feel Him;
our flesh feeds upon Him,
Him, the Infinite, the Incomprehensible,
the Immense, the Eternal. "It is not sufficient to say that
the Eucharist is at the center of the Church,
because actually, the Eucharist makes the Church!
It builds it from within
and weaves it round itself like a robe.

It is said that two sacraments in particular
"make" the Church:  Baptism and the Eucharist.

But whereas Baptism makes the Church grow quantitatively, as it were, in size and number,
the Eucharist makes her grow qualitatively,
in strength, because it transforms her ever more deeply
into the image of Christ, her Head."

Raniero Cantalamessa
The Eucharist, Our Sanctification