"Let us stand fast in what is right,
and prepare our souls for trial.
Let us wait upon God's strengthening aid
and say to Him:
O Lord, you have been our refuge
in all generations." 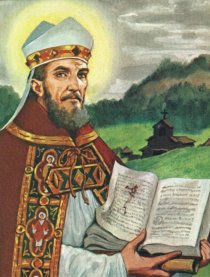 “In her voyage across the ocean of this world, the Church is like a great ship being pounded by the waves of life's different stresses. Our duty is not to abandon ship but to keep her on her course.” ~ St Boniface

St Boniface, pray for us!
Posted by Janette at 4:45 AM No comments:

"Kneel down!  Kneel down! Do you not see on high the
golden Chalice and the bright rays from the Host?
It is the Blessed Sacrament of the Altar.  The Angels are adoring It.
Come let us join our adoration to theirs." - St Pascal Baylon (+1592)

"When you are before the altar where Christ reposes,
you ought no longer to think that you are amongst men;
but believe that there are troops of angels and archangels
standing by you, and trembling with respect
before the sovereign Master of Heaven and earth.

Therefore, when you are in church,
be there in silence, fear, and veneration."


St. John Chrysostom
Posted by Janette at 4:45 AM No comments:

to the Blessed Sacrament, and I took you with me,

for you know very well I never leave you.

I am so happy about the nice day you had." 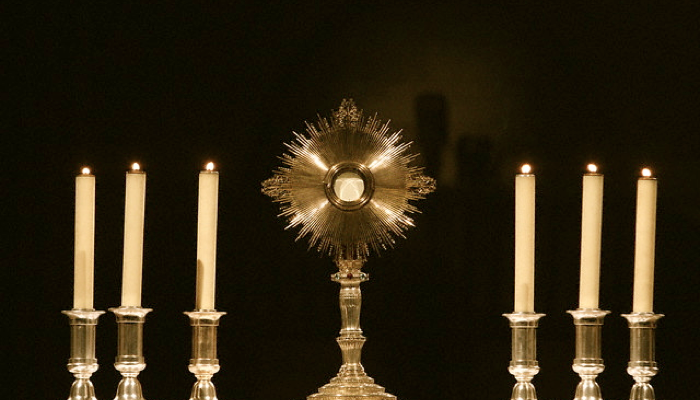 exposed in the oratory.  When I open the door...
it seems to me rather like the gate of Heaven opening!
Then I present to Jesus all those who are in my heart,

and there, close to Him, I find them again."

A longing fulfilled is sweet to the soul...
Proverbs 13:19a 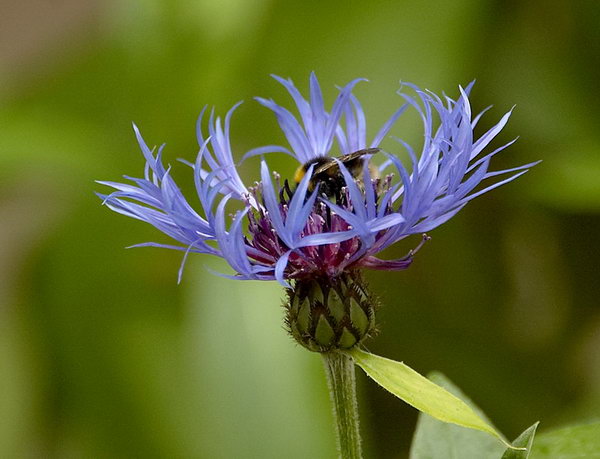 St John Vianney
Posted by Janette at 4:45 AM No comments:

Believing what is true...

The earliest documentation of the Liturgies of the Eucharist and the Word
co-joined is found in the First Apology written by St Justin Martyr in 150 AD.
The liturgy that St Justin describes is so like our own as to be astonishing.
It clearly includes the Offertory, Preface and Canon, Great Amen and Holy Communion. "No one may share in the Eucharist with us
unless he believes that what we teach is true,
unless he is washed in the regenerating waters of baptism
for the remission of his sins,
and unless he lives in accordance
with the principles given us by Christ.


The apostles, in their recollections, which are called gospels, handed down to us what Jesus commanded them to do. They tell us that He took bread, gave thanks and said: Do this in memory of Me. This is My body. In the same way He took the cup, He gave thanks and said: This is My blood. The Lord gave this command to them alone. Ever since then we have constantly reminded one another of these things. The rich among us help the poor and we are always united. For all that we receive we praise the Creator of the universe through His Son Jesus Christ and through the Holy Spirit.

On Sunday we have a common assembly of all our members, whether they live in the city or in the outlying districts. The recollections of the apostles or the writings of the prophets are read, as long as there is time. When the reader has finished, the president of the assembly speaks to us; he urges everyone to imitate the examples of virtue we have heard in the readings. Then we all stand up together and pray.

On the conclusion of our prayer, bread and wine and water are brought forward. The president offers prayers and gives thanks to the best of his ability, and the people give their assent by saying, 'Amen.' The Eucharist is distributed, everyone present communicates, and the deacons take it to those who are absent.

The wealthy, if they wish, may make a contribution, and they themselves decide the amount. The collection is placed in the custody of the president, who uses it to help the orphans and widows and all who for any reason are in distress, whether because they are sick, in prison, or away from home. In a word, he takes care of all who are in need.

We hold our common assembly on Sunday because it is the first day of the week, the day on which God put darkness and chaos to flight and created the world, and because on that same day our savior Jesus Christ rose from the dead. For He was crucified on Friday and on Sunday He appeared to His apostles and disciples and taught them the things that we have passed on for your  consideration." St Justin, pray for us!
Posted by Janette at 4:45 AM No comments:

Solemnity of Pentecost
Fifty days after Easter
In honor of the Holy Spirit - wear RED to holy Mass today!

Today is Pentecost. It is not merely a reminder of a past event, but a continuation of the Spirit renewing the face of the earth (Psalm 104:30). Today's Pentecost will not be a shadow of the first Pentecost, rather the first Pentecost is a shadow of today's Pentecost. God's grace is abounding all the more (Romans 5:20). The Spirit is not diminishing His work in our world, but increasing it. It will not be only thousands who come to Jesus today (Acts 2:41), but millions. The waters of the Spirit become deeper as they flow further around the world and into history (Ezekiel 47:5).

The love of God has been poured into our hearts through
the Spirit of God dwelling within us, Alleluia. - Rom 5:5; cf 8:11
-Entrance antiphon, today's liturgy 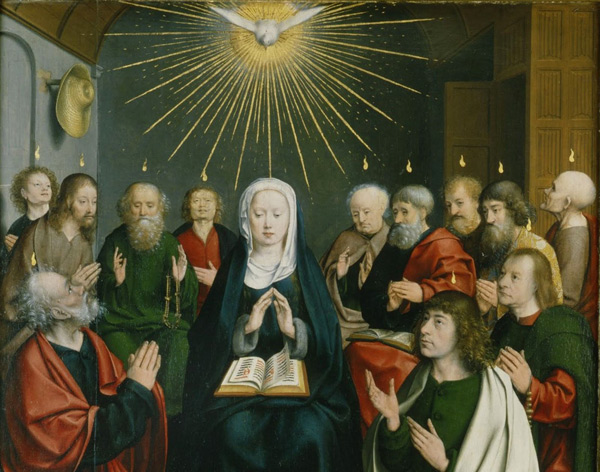 "The Church draws her life from the Eucharist.
This truth does not simply express a daily experience of faith,
but recapitulates the  heart of the mystery of the Church. In a variety of ways
she joyfully experiences the constant fulfillment of the promise:
“Lo, I am with you always, to the close of the age” (Mt 28:20),
but in the Holy Eucharist, through the changing of bread and wine into the body and blood of the Lord, she rejoices in this presence with unique intensity.
Ever since Pentecost,  when the Church, the People of the New Covenant,
began her pilgrim journey towards her heavenly homeland,
the Divine Sacrament has continued to mark the passing of her days,
filling them with confident hope." (Introduction, 1)

Pope St John Paul II
Encyclical Letter, Ecclesia de Eucharistia
On the Eucharist in its relationship to the Church

" Come, Holy Spirit, you are harmony, make us builders of unity.
You always give yourself, grant us the courage to go out of ourselves, to love and help each other, in order to become one family. Amen.
Pope Francis, excerpt Pentecost homily 2020
Full text: Full text: Pope Francis’ homily on Pentecost Sunday

The Holy Spirit "leads us to perceive the Lord’s presence
and love in our lives, and moves us to respond joyfully
in prayer and adoration."- Pope Francis

In the Pantheon in Rome, thousands of rose petals are dropped
from the oculus after the celebration of Pentecost Mass! Come, Father of the poor!
Come, source of all our store!
Come, within our bosoms shine.

You, of comforters the best;
You, the soul’s most welcome guest;
Sweet refreshment here below;

In our labor, rest most sweet;
Grateful coolness in the heat;
Solace in the midst of woe.

O most blessed Light divine,
Shine within these hearts of yours,
And our inmost being fill!

Heal our wounds, our strength renew;
On our dryness pour your dew;
Wash the stains of guilt away:

Bend the stubborn heart and will;
Melt the frozen, warm the chill;
Guide the steps that go astray.

On the faithful, who adore
And confess you, evermore
In your sevenfold gift descend:

With the Holy Spirit within us, "it is quite natural for people
who had been absorbed by the things of this world to become
entirely otherworldly in outlook, and for cowards to become
people of great courage." - St Cyril of Alexandria

Come, Holy Spirit, Come!
Posted by Janette at 8:34 AM No comments: "About Jesus Christ and the Church,
I simply know
they're just one thing,
and we shouldn't complicate the matter."
- St Joan of Arc, as recorded at her trial


"She chose a path and went down it like a thunderbolt."
- GK Chesterton in Orthodoxy

St Joan of Arc, pray for us!
Posted by Janette at 4:45 AM No comments:

"When I entered the chapel,
once again the majesty of God
overwhelmed me."
St. Maria Faustina of the Blessed Sacrament 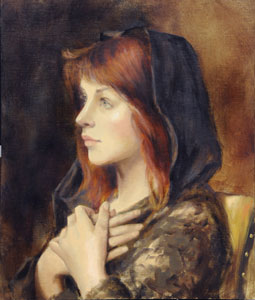 "The Heart of Jesus is always living in the Eucharist
to satisfy the hunger of all who long for Him,
to welcome and console all those who,
disillusioned by the vicissitudes of life,
take refuge in Him,
seeking peace and refreshment."

Fr. Gabriel of Saint Mary Magdalen
Posted by Janette at 4:45 AM No comments:

Then you will know the truth,
and the truth will set you free. - John 8:32

Turn it which way we will,
throw the light of love and knowledge
now on one side of it, now on another,
still the result is the same,
the one inexhaustible sweet fact
of the Real Presence.

In the hands of the priest,
behind the crystal of the monstrance,
on the tongue of the communicant,
now, and for a thousand times,
and almost at our will and pleasure,
there are the Hands and Feet,
the Eyes and Mouth,
the swift Blood and living Heart of Him
whom Thomas touched and Magdalen was fain to touch,
the Soul that ... set the prisoners free."


Come, Holy Spirit, fill the hearts of Your faithful,
and enkindle in them the fire of Your love.
Send forth Your Spirit, and they shall be created,
And You shall renew the face of the earth.
O God, Who by the light of the Holy Spirit, did instruct the hearts
of Your faithful, grant that by that same Holy Spirit,
we may be truly wise and ever rejoice
in His consolation, through Christ our Lord.  Amen.