Grant, we pray, almighty God, that by Saint Joseph's intercession
your Church may constantly watch over the unfolding of the mysteries of
human salvation, whose beginnings you entrusted to his faithful care.
Collect ~Today's Liturgy

"The same divine hand which fashions each man's heart
gave a father's heart to Joseph and a son's heart to Jesus, so that Jesus obeyed Joseph
and Joseph did not fear to command Jesus.  It was because Christ's true Father
had chosen Joseph to act as father to His Son in this world.  And in so doing God had,
as it were, charged Joseph's breast with some ray or spark of His own
boundless love for His Son.  It was that that aroused a father's love in Joseph;
so much so that, feeling a father's heart burn within him,
Joseph also felt that God was telling him to use a father's authority." -  Bossuet

"Saint Joseph believed unhesitatingly in the mystery
of the Incarnation, in the fruitful virginity and in the divine maternity of Mary.
He believed without seeing the miracles that were to fill Judea
with his glory and renown of his holy name.
We too should recognize Jesus in the frail Host
that is offered to us at the altar. Here He is even smaller than
at Bethlehem, more hidden than in Saint Joseph's workshop.
Still it is He, 'I believe all the Son of God has spoken,
than Truth's own word there is no truer token.'"

“He [St. Joseph] nourished with the greatest solicitude
Him whom the faithful were one day to receive
as the Bread of Life on their homeward journey.”   ~ Pope Pius IX 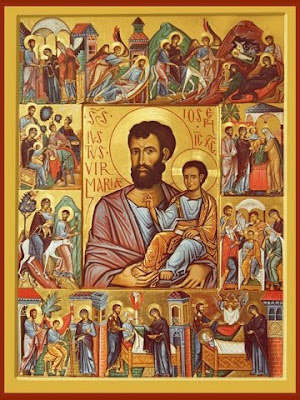 "Saint Joseph  joined with Mary in adoration and
united himself to Christ, Whose heart surged with sentiments of adoration, love
and praise for the Father and of charity for men. St. Joseph’s adoration kept pace
with every stage of our Lord’s life, drawing upon the grace, the spirit,
and the virtue of each mystery.
In the Incarnation he adored the self-annihilation of the Son of God;
at Bethlehem, the poverty; at Nazareth, the silence, the apparent weakness,
the obedience, and all the other virtues of Christ.…

Because his faith was so strong, Joseph’s mind
and heart bowed in perfect adoration. Imitate his faith as you kneel
before the  humble Christ annihilated in the Eucharist.
Pierce the veil which covers this furnace of love and adore the hidden God. ”

"To other Saints our Lord has given power to help in one sort
of need, but this glorious saint, as I know by experience,
helps us in every need." - St Teresa of Avila

St Joseph, pray for us!

"When Egypt was laid waste by the great famine,
Pharaoh told his people,
Ite ad Joseph! - Go to Joseph! (Genesis 41:55)
So if we are in trouble, let us listen to the word of the Lord
and take Pharaoh's advice;
let us go to Joseph if we wish to be consoled."
- St Alphonsus de Ligouri

Click here: Why St. Joseph? Patron of the Church and Spiritual Father
Posted by Janette at 4:45 AM