FEAST of the VISITATION
May 31
Blessed is she who believed that what the Lord
has said would be fulfilled. ~ Luke 1:45

"O noble Virgin, truly you are greater than any other greatness. For who is your equal in greatness, O dwelling place of God the Word? To whom among all creatures shall I compare you, O Virgin? You are greater than them all, O of the Covenant, clothed with purity instead of gold! You are the in which is found the golden vessel containing the true manna, that is, the flesh in which Divinity resides." ~ St Athanasius

“Mary also anticipated, in the mystery of the Incarnation,
the Church’s Eucharistic faith.  When, at the Visitation, she bore
in her womb the Word made flesh, she became in some way
a ‘tabernacle’ – the first ‘tabernacle’ in history –
in which the Son of God, still invisible to our human gaze,
allowed Himself to be adored by Elizabeth radiating His light
as it were through the eyes and the voice of Mary.

And is not the enraptured gaze of Mary …
that unparalleled model of love which should inspire us
every time we receive Eucharistic communion?”

﻿
ORDAINED to the Holy Priesthood of Jesus Christ TODAY
Saturday, May 31, 2014
Oh, day of Love Divine, all loves excelling!
An Old German saying:
It is worth wearing out a pair of shoes to walk
to receive a priest's First Blessing!

Rev. Mr. David Bayardo ~ Diocese of
Let us hold them in prayer and offer thanksgiving for their 'YES'!

"How happy I was today.
My heart was on fire with love for Jesus...
I have begun to taste paradise !"

(St Padre Pio, speaking of his first Mass)
Posted by Janette at 4:45 AM No comments:

And I pray that you, being rooted and established in love,
may have power, together with all the saints, to grasp how wide
and long and high and deep is the love of Christ, and to know this love
that surpasses knowledge – that you may be filled
to the measure of all the fullness of God. – Eph 3: 17b-19 St Josemaria Escriva recommended priests to keep the Blessed Sacrament company as much as they could. He wanted all of them to increase their devotion to the Eucharist, pointing out to them:

“Don’t do it for your parishioners to see, but don’t worry if they do see you. If you are centered on our Lord, and people notice how you love Him, they’ll ask you why, and then you can tell them about this love that should fill your whole life.”
Posted by Janette at 4:45 AM No comments:

Solemnity of the Ascension of the Lord*
*All worldwide and ecclesiastical provinces of , , , , and the state of  have retained this celebration on Thursday, while all other provinces have transferred this Solemnity to the Seventh Sunday of Easter, June 1.
...the fortieth day after Easter Sunday, commemorating the Ascension of Christ
into heaven, according to Mark 16:19, Luke 24:51, and Acts 1:2.
In the liturgies the day is meant to celebrate the completion of the work
of our salvation, the pledge of our glorification with Christ,
and His entry into heaven with our human nature glorified.

"...Christ's Ascension is our uplifting, and the hope of the Body is raised, whither the glory of the Head has gone before, let us exult, dearly-beloved, with worthy joy and delight in the loyal paying of thanks.
For today not only are we confirmed as possessors of paradise, but have also in Christ penetrated the heights of heaven, and have gained still greater things through Christ's unspeakable grace than we had lost through the devil's malice."- Pope St Gregory the Great - Sermon LXXIII 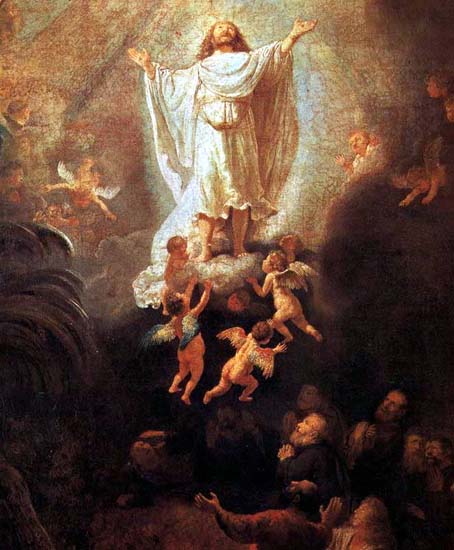 “Ascending once again to the Inaccessible Light…
You remain still in the ‘valley of tears,’
hidden beneath the appearances of a white host.” 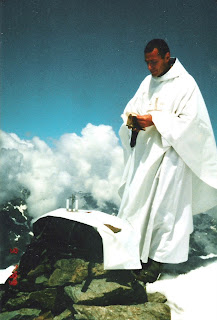 The Feast of the Ascension marks the beginning of the first novena, or nine days of prayer.  Today, Catholics recall that first novena by praying the Novena to the Holy Ghost between Ascension and Pentecost, asking for the gifts of the Holy Spirit.  BEGIN the NOVENA FRIDAY!
"Let our hearts ascend with Christ."  ~ St Augustine
Click here: PENTECOST Novena of Seven Gifts
OR simply pray each day ...
Come, Holy Spirit, fill the hearts of Your faithful,
and enkindle in them the fire of Your love.
V. Send forth Your Spirit, and they shall be created,
R. And You shall renew the face of the earth.
Let us pray.
O God, Who by the light of the Holy Spirit, did instruct the hearts of Your faithful, grant that by that same Holy Spirit, we may be truly wise and ever rejoice in His consolation, through Christ our Lord. Amen.
Posted by Janette at 4:45 AM No comments:

Then you will know the truth,
and the truth will set you free.- John 8:32

In the hands of the priest, behind the crystal of the monstrance,
on the tongue of the communicant, now, and for a thousand times,
and almost at our will and pleasure, there are the Hands and Feet,
the Eyes and Mouth, the swift Blood and living Heart of Him
whom Thomas touched and Magdalen was fain to touch,
the Soul that ... set the prisoners free."


Fr Frederick Faber
Posted by Janette at 4:45 AM No comments:

The boundary lines have fallen for me in pleasant places;
surely I have a delightful inheritance. - Psalm 16:6


"God, in His promises to hear our prayers, is desirous to bestow Himself upon us; if you find anything better than Him, ask it; but if you ask anything beneath Him, you put an affront upon Him, and hurt yourself by preferring to Him a creature which He framed: Pray in the spirit and sentiment of love, in which the royal prophet said to Him, 'Thou, O Lord, are my portion.' Let others choose to themselves portions among creatures, for my part, You are my portion, You alone I have chosen for my whole inheritance." 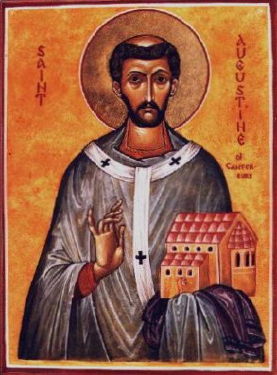 In a letter to Augustine, Pope Gregory the Great wrote:
"He who would climb to a lofty height must go by steps, not leaps."


St Augustine of Canterbury, pray for us!
Posted by Janette at 4:45 AM No comments:

"God makes all His own the soul
that is wholly given to Him." - St Philip Neri

"At Communion we ought to
ask for the remedy of the vice
to which we feel ourselves most inclined."
St Philip Neri
Italy ~ 1515 - 1595
Priest, bears title "Second Apostle of Rome"
Founder ~ Congregation of the Oratory
Counter-reformer
FEAST DAY - May 26

"The true servant of God acknowledges
no other country but heaven." - St Philip Neri
Posted by Janette at 4:45 AM No comments:

O Father, give us holy ministers
for Your altar,

Who shall be attentive and
fervent guardians of the Eucharist,

the Sacrament of the supreme
gift of Christ for the redemption
of the world."

Let us join Pope Emeritus in this prayer!

Joyously remembering the Ordination of
Fr Spencer J Howe - 25 May 2013
and in gratitude for all men Our Lord has called to the altar as priests.

"If you could only understand the value of one Holy Communion!
A single Communion should make us other Christs!"
- St Madeleine Sophie Barat

"I am espoused to Him Whom the Angels serve,
at Whose beauty the sun and the moon wonder.
Already is His Flesh united to mine
and His Blood glows in my cheeks."

ORDAINED to the Holy Priesthood of Jesus Christ TODAY
Saturday, May 24, 2014
Oh, day of Love Divine, all loves excelling!
An Old German saying:
It is worth wearing out a pair of shoes to walk
to receive a priest's First Blessing!

Cathedral Basilica of the Sacred Heart


Let us hold them in prayer and offer thanksgiving for their 'YES'!


"Your thumb and your forefinger
have received the unction of the Holy Chrism.
It is between thethumb and the forefinger very delicately
that you must take the wounded souls."  ~ Pere Lamy
Posted by Janette at 4:45 AM No comments:

One follows the other...

"The stillness of prayer
is the most essential condition
for fruitful action.
Before all else, the disciple kneels down."

St. Gianna Molla
Posted by Janette at 4:45 AM No comments:

Christ made her heart His! 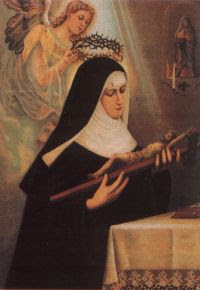 The saint of Cascia belongs to the great host of Christian women who "have had a significant impact on the life of the Church as well as of society" (Apostolic Letter Mulieris dignitatem, n. 27). Rita well interpreted the "feminine genius" by living it intensely in both physical and spiritual motherhood. " ~ Saint John Paul II

St Rita was a stigmatist who suffered a wound of Christ on her forehead.  When St. Rita died her face became beautifully radiant and her cell was aglow with heavenly light, while the great bell of the monastery rang of itself. Her incorrupt body, which for several centuries gave off a sweet fragrance, is preserved in a shrine in .  It is said that at her beatification, the body of the saint raised itself up and opened its eyes. St. Rita is called "The Saint of the Impossible" and is particularly invoked in cases of matrimonial difficulties.

St. Rita of Cascia was the first woman to be canonized in the Great Jubilee at the beginning of the 20th century, on May 24, 1900.
St Rita of Cascia, pray for us!