Happy is the soul...

"The Eucharist is at the very center of our life;
such was the teaching of Jesus. ...  The Christian faith is
faith in the Eucharistic Christ." - Jean Galot, SJ

"Happy is the soul
that knows how to find
Jesus in the Eucharist,
and the Eucharist in all things!"
St Peter Julian Eymard 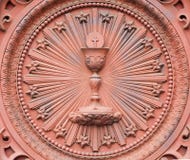 Painting above: Grand-mere et petite fille a la campagne by Ernst Karl Georg Zimmerman (1901)
Posted by Janette at 4:45 AM No comments:

“I want to encourage everyone to visit–
if possible, every day—
especially amid life’s difficulties,
the Blessed Sacrament
of the infinite love of Christ
and His mercy,
preserved in our churches and often abandoned,
to speak filially with Him,
to listen to Him in silence,
and to peacefully entrust yourself to Him."
Pope Francis
Photo: Brooks family, St Joseph's Catholic Church, Alexandria, VA
Photo Credit: CNS photo/Nancy Phelan Wiecher  (2011)
Posted by Janette at 4:45 AM No comments:

"Jesus, what made You so small?  LOVE!
- St Bernard of Clarivaux

"Let us rediscover the beauty of the
Sacrament of the Eucharist, which expresses all of
God's humility and holiness: He makes Himself little --
God becomes little -- a fragment of the universe,
to reconcile all things in His love."

“If you believe what you like in the gospel, and reject
what you don't like, it is not the gospel you believe,
but yourself.” - St. Augustine of Hippo

"In 397, or twelve years after his conversion, Augustine wrote his Confessions, the greatest spiritual autobiography ever written. It is the work of a teacher who explains, a philosopher who thinks, and a theologian who instructs. It is the  work of a poet who achieves chaste beauty in the writing, and a mystic who pours out thanks for having found himself in peace. " - Ven Fulton J. Sheen in St Augustine of Hippo


St Augustine, pray for us!
Posted by Janette at 4:45 AM No comments:

St Augustine has left us this praise of his mother, St Monica:

"She did not let a day pass
without being present
at the Divine Sacrifice
before Your altar, O Lord."

"Nothing is far from God." - St Monica

As recounted by Augustine... before his mother died she told him:

"There was indeed one thing for which I wished to tarry a little in this life, and that was that I might see you a Catholic before I died. My God hath answered this more than abundantly, so that I see you are now made His servant and spurning all earthly happiness. What more am I to do here?" 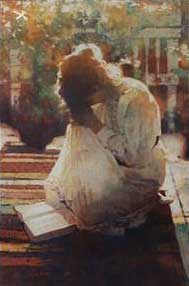 Exemplary mother of the great Augustine, you perseveringly pursued your wayward son not with wild threats but with prayerful cries to heaven. Intercede for all mothers in our day so that they may learn to draw their children to God. Teach them how to remain close to their children, even the prodigal sons and daughters who have sadly gone astray. Amen.

St Monica, pray for us!

Motherly advice... of the highest sort ...

But you would be fed with the finest of wheat;
with honey from the rock, I would satisfy you. - Psalm 81:16

"If I can give you any advice, I beg you
to get closer to the Eucharist and to Jesus...
We must pray to Jesus to give us
that tenderness of the Eucharist."

Fine art above: Artist: Emile Friant
Posted by Janette at 4:45 AM 1 comment:

... so is my word that goes out from my mouth: It will not return
to me empty, but will accomplish what I desire
and achieve the purpose for which I sent it. - Isaiah 55:11

"In the person of St Louis IX were the qualities which form a great king, a hero of romance, and a saint!  With his death, the century of knights ended.  One day a messenger, breathless with haste, burst in upon the king with surprising and exciting news. "Your majesty," he cried, "hasten to the Church!  A great miracle is occurring there.  A priest is saying holy Mass, and after the consecration, instead of the host there is visible on the altar Jesus Himself in His human figure.  Everybody is marveling at it.  Hurry before it disappears."

To the astonishment of the messenger, the saintly monarch calmly replied:

Let them go to see the miracle who have any doubt regarding the Real Presence of our Lord in the Holy Sacrament.  As for me, even if I saw Jesus on the altar in His visible form, and touched Him with my hand, and heard His voice, I should not be more convinced than I now am, that He is present in the consecrated Host.
The word of Christ is sufficient for me.
I need no miracle."

Excerpt from Hidden Treasure, the Riches of the Eucharist, Louis Kaczmarek

From St Louis' mother...
"Never forget that sin is the only great evil in the world. No mother
could love her son more than I love you. But I would rather see you lying
dead at my feet than know that you had offended God by one mortal sin."

King St Louis IX, pray for us!
Posted by Janette at 4:45 AM No comments:

“It became obvious why Catholics had built such beautiful cathedrals and churches throughout the world.
Not as gathering or meeting places for Christians.
But as a home for Jesus Himself in the Blessed Sacrament.
Cathedrals house Jesus.
Christians merely come and visit Him.
The cathedrals and churches architecturally
prepare our souls
for the beauty of the Eucharist.”

Allen R. Hunt
Excerpt from: Confessions of a Mega Church Pastor:
How I Discovered the Hidden Treasure of the Catholic Church (2010)

Today is the FEAST DAY of St Bartholomew
Nee: Cana
Apostle and Martyr

"Here is a true child of Israel. There is no duplicity in him."
- said of St Bartholomew by Jesus - Gospel of St John 1: 47 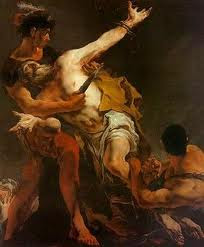 Among the twelve apostles great…There was Bartholomew…Known also as Nathanael…Among Christ’s chosen few…He too received The Holy Ghost…And he preached everywhere…That every soul might turn to God…And no one might despair…St Philip introduced him to…The Master and The Lord…And thus he came to understand…The goal he struggled toward…Bartholomew proclaimed the faith…Through all the barbarous East…And in the truest Christian sense…He was a holy priest…His death was double martyrdom…As legend now abide…Condemned to death, Bartholomew…Was flayed and crucified.  ~ James Metcalfe, Poem Portraits of the Saints


St Bartholomew, pray for us!
Posted by Janette at 4:45 AM No comments:

To pass entirely into God...

“St Rose of  was so ardent in her love of God in the Blessed Sacrament that when she knelt in His presence the fire which sparkled in her eyes showed the flame which consumed her soul.  At times she appeared like an angel.

If anyone asked her what effects the Blessed Sacrament produced in her, she stammered and said she had no words to express them, but that she seemed to pass entirely into God, and was inundated with such happiness that nothing in common life could be compared to it” (pg 34, Hidden Treasure).  ...

“St Joseph Benedict LaBre, St Paschal Baylon and St Rose of Lima are three saints that we know of who spent forty straight hours in the presence of the Blessed Sacrament commemorating the forty hours Christ was in the tomb” (pg 39, Hidden Treasure).

From Hidden Treasure, The Riches of the Eucharist ~ Louis Kaczmarek

"Apart from the cross there is no other ladder
by which we may get to heaven." ~ St Rose of Lima

St Rose of Lima, pray for us!

"I shall sing a hymn to the mother, the Queen, whom I joyously
approach in praise, gladly celebrating her wonders in song. . .
Our tongue cannot worthily praise thee, O Lady; for thou who
hast borne Christ the king art exalted above the seraphim. . .
Hail, O Queen of the world; hail, O Mary, Queen of us all."
-  Axathistos (Byzantine hymn) 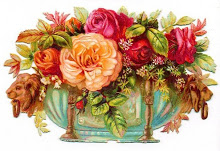 Feast established - Pope Pius XII - October 11, 1954
Encyclical Letter "Ad Caeli Reginam."
He points out that Mary deserves the title because she is Mother of God,
because she is closely associated as the New Eve with Jesus’ redemptive work,
because of her preeminent perfection and because of her intercessory power.

“When she became Mother of the Creator,
she truly became Queen of every creature.”~ St. John Damascene

"Every time the Son of God comes again to us in the “poverty” of the sacramental signs of bread and wine, the seeds of that new history wherein the mighty are “put down from their thrones” and “those of low degree are exalted” (cf. Lk 1:52), take root in the world. Mary sings of the “new heavens” and the “new earth”
which find in the Eucharist their anticipation and in some sense their programme and plan. The Magnificat expresses Mary's spirituality, and there is nothing greater than this spirituality for helping us to experience the mystery of the Eucharist. The Eucharist has been given to us so that our life, like that of Mary, may become completely a Magnificat!

“Mary, then, is a Queen; but for our common consolation, be it known
that she is a Queen so sweet, clement, and so ready to help us
that  wills that we salute her as Queen of Mercy.
Mary is Queen of Mercy as Jesus is King of Justice.”

“It is true that Our Lady is Queen of Heaven and earth,
but at the same time she is more Mother than Queen.” - St. Therese of Lisieux

Mary, our Mother, Queen of Heaven,
pray for us!
Posted by Janette at 4:45 AM No comments:

"Begin all of your periods of adoration with an act of love,
and you will open your soul deliciously
to His divine action." - St Peter Julian Eymard

"Through adoration
the Christian contributes mysteriously
to the radical transformation
of the world."

I have been crucified with Christ; it is no longer I who live,
but Christ who lives in me; and the life I now live in the flesh I live by faith
in the Son of God,who loved me and gave Himself for me - Gal. 2: 20

“If we do not experience
so frequent and violent attacks
of anger, envy and concupiscence as formerly,
let us give thanks
to Jesus Christ in the Blessed Sacrament,
who has produced these effects in us.”

St Bernard of Clairvaux, pray for us!
Posted by Janette at 4:45 AM No comments: