Have no fear, O my soul 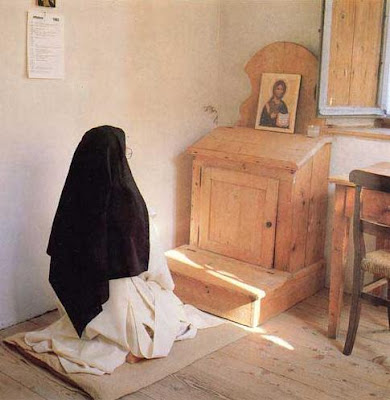 "What need I fear?
He Who sustains the world is within me.
The Blood of a God circulates within my veins:
Have no fear, O my soul.
The Lord of the Universe
has taken you up into His Arms
and wants you to find rest in Him.”
Luisa M. Claret de la Touche, Servant of God

St Scholastica
Italy ~ 480-547
Benedictine Abbess
Twin sister of St Benedict
FEAST DAY – February 10
"She was able to do more because she loved more." ~ St Gregory the Great
St Scholastica, ora pro nobis!
Saint Scholastica, twin sister of Saint Benedict of Nursia who founded of the Benedictine order, was consecrated to God at a very early age but probably continued to live in her parents' home. It is said that she was as devoted to Jesus as she was to her brother. So, when Benedict established his monastery at Monte , Scholastica founded a convent in nearby Plombariola, about five miles south of Monte . The convent is said to have been under the direction of her brother, thus she is regarded as the first Benedictine nun.

The siblings were quite close. The respective rules of their houses proscribed either entering the other's monastery. According to Saint Gregory, they met once a year at a house near Monte monastery to confer on spiritual matters, and were eventually buried together, probably in the same grave. Saint Gregory says, "so death did not separate the bodies of these two, whose minds had ever been united in the Lord."

Saint Gregory tells the charming story of the last meeting of the two saints on earth. Scholastica and Benedict had spent the day in the "mutual comfort of heavenly talk" and with nightfall approaching, Benedict prepared to leave. Scholastica, having a presentiment that it would be their last opportunity to see each other alive, asked him to spend the evening in conversation. Benedict sternly refused because he did not wish to break his own rule by spending a night away from Monte . Thereupon, Scholastica cried openly, laid her head upon the table, and prayed that God would intercede for her. As she did so, a sudden storm arose. The violent rain and hail came in such a torrential downpour that Benedict and his companions were unable to depart.

"May Almighty God forgive you, sister" said Benedict, "for what you have done." "I asked a favor of you," Scholastica replied simply, "and you refused it. I asked it of God, and He has granted it!"
Just after his return to Monte , Benedict saw a vision of Scholastica's soul departing her body, ascending to heaven in the form of a dove. She died three days after their last meeting. He placed her body in the tomb he had prepared for himself, and arranged for his own to be placed there after his death.
from the Dialogues of Saint Gregory the Great