"A Holy Hour of Eucharistic Adoration
is a sharing in the work of Redemption."
Archbishop Fulton J Sheen

"Think of it this way, Thomas (priest receiving this letter). Because  [de Porres] was black and illegitimate he was insulted and mistreated.  He identified with Jesus, ignored and mistreated in the Blessed Sacrament.  As they consoled each other, Martin became more charitable, not hostile, better not bitter.  He would spend as many as eight hours each day in prayer before the Blessed Sacrament.
This so pleased Jesus that he made Martin a miracle worker.  He would take a basket of fresh bread from the monastery and go out into the streets to feed the poor.  With a single basket of bread he would feed an entire barrio.
Martin fed hundreds of starving people with a single basket of bread.  You, dear Thomas, save hundreds of people from hell with a single holy hour of prayer in the Presence of the Living Bread come down from Heaven."
Excerpt from: Letters To A Brother Priest
Co-Authors: Rev. Fr Vincent Martin Lucia
and Rev. Msgr. Josefino Ramirez 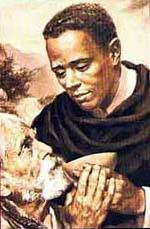 In 1962, Pope St John XXIII beautifully remarked at the canonization of Saint Martin de Porres: "He excused the faults of others. He forgave the bitterest injuries, convinced that he deserved much severer punishments on account of his own sins. He tried with all his might to redeem the guilty; lovingly he comforted the sick; he provided food, clothing and medicine for the poor; he helped, as best he could, farm laborers and Negroes, as well as mulattoes, who were looked upon at that time as akin to slaves: thus he deserved to be called by the name the people gave him: 'Martin of Charity.'"
Click here: St. Martin de Porres - YouTube (2 mins) Apostleship of Prayer
Click here: St. Martin de Porres - YouTube (3 mins) CCTN

St Martin de Porres, pray for us!
Posted by Janette at 4:45 AM