Temples of the Holy Spirit

"Those whose hearts are pure
are temples of the Holy Spirit."
St Lucy (Santa Lucia)
In Italian, Lucia means "light"
Virgin, Martyr
Sicily ~ 283-304
Patron of blindness and eye problems
Feast Day - December 13
(Happy Anniversary to Jeff, Spencer and the Johnsons -
11 years in the Church!) 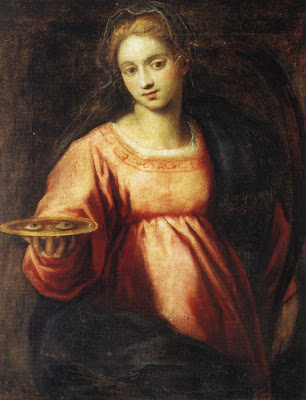 Sentenced to be defiled in a brothel, Lucy asserted:
St Lucia, ora pro nobis!
A BIT ABOUT ST LUCY...

St. Lucy (Santa Lucia) was a young Sicilian girl who vowed to live as a virgin in devotion to Christ. Her mother, however, arranged a marriage for her to a pagan suitor. To dissuade her mom by proof of a miracle, Lucy prayed at the tomb of St. Agatha that her mother's hemorrhage would stop. When the miracle happened, her mother agreed to leave aside the topic of marriage.

Lucy's suitor, however, had other plans, and revealed Lucy as a Christian. Authorities went to collect her, planning on forcing her into prostitution -- but they were unable to budge her, even after tying her to a team of oxen. She was then tortured by having her eyes torn out. They'd planned on torturing her by fire, too, but the fires kept going out. She was then killed by being stabbed in the throat with a dagger. Lucy's martyrdom: December 13, 304.

Lucy is the patron of those with eye problems, and often depicted carrying her eyes (often on a plate), being tied to a team of oxen, with St. Agatha, or before her judges.
Excerpt from:  http://fisheaters.com/customsadvent6a.html

Saint Lucy is one of seven women, aside from the Blessed Virgin Mary, commemorated by name in Eucharistic Prayer I of the Canon of Mass.
Posted by Janette at 4:45 AM