Feast of Our Lady of the Rosary
October 7

LÃ¥tefossen is unique among Norwegian waterfalls: two streams coming together
on the side of a mountain just before they merge into another river in the valley below.

"Jesus gave Himself as spiritual food
and True Presence among us
in the Blessed Sacrament.  In our own century at Fatima,
Mary asked the three children and us to,
'Pray the Rosary every day.'
Here we see two marvelous fonts of grace flowing together.

When we receive Jesus in the Eucharist, we become united with Him.
Adoring His presence exposed on the altar or in the tabernacle we bask
in His warmth. Meditating on the Rosary, we recall Jesus' life, death
and resurrection and the union of His mother in the work of our salvation.

Through the Eucharist and the Rosary,
two hearts are joined in love,
and we, in love, are joined to those two hearts."

From the article, "Mirroring Divine Love," by Michael Six

More on...the FEAST of Our Lady of the Rosary


To commemorate the victory of the Christian Armada over the Turks on Oct 7, 1571, Pope Pius V introduced the Feast of Our Lady of Victory. Christian Europe had been at risk  of being conquered by the  (Muslim). The year leading up to the battle had been declared the Year of the Rosary.  At the beginning of that year, each mariner of the Holy League was given a rosary and instructed to pray it daily.  The rosary also served to unite the contentious factions of the Holy League during the year of its formation and proved equally important for getting the Holy League to the battle as winning the battle. When faced with unfavorable wind at the onset of the battle, the men picked up their rosaries and began praying.  Miraculously the winds shifted and served to be a key factor in the ensuing victory.

The Feast's name was changed in 1969 to Our Lady of the Rosary and it is now a mandatory memorial.  It is now attached to and starts Respect For Life Month.

Many complain that the Mass and Rosary are repetitious.  However, the “repetition” of the Mass and Rosary alike can work a slow but deep transformation of one's heart. One could also point out that repetition is not necessarily a sign of a lack of imagination. It may be sheer exuberant pleasure that makes us repeat an activity.  G. K. Chesterton argued that repetition is a characteristic of the vitality of children.  They like the same stories, the same words, time and time again, not because they are bored and unimaginative but because they delight in life.

“Because children have abounding vitality, because they are in spirit fierce and free, therefore they want things repeated and unchanged. They always say, “Do it again”; and the grown-up person does it again until he is nearly dead, for grown-up people are not strong enough to exult in monotony. But perhaps God is strong enough to exult in monotony.  It is possible that God says every morning, “Do it again” to the sun; and every evening “Do it again” to the moon. It may not be automatic necessity that makes all daisies alike; it may be that God makes each daisy separately, but has never got tired of making them. It may be that He has the eternal appetite of infancy; for we have sinned and grown old and our Father is younger than we. The repetition in Nature may not be a mere recurrence; it may be a theatrical encore. Heaven may encore the bird who laid an egg."

Pray the Rosary.  Pray the Mass.
Exult in the monotony. Transform your heart.
By word and example bring others close to Jesus
in the Blessed Sacrament and the Rosary! 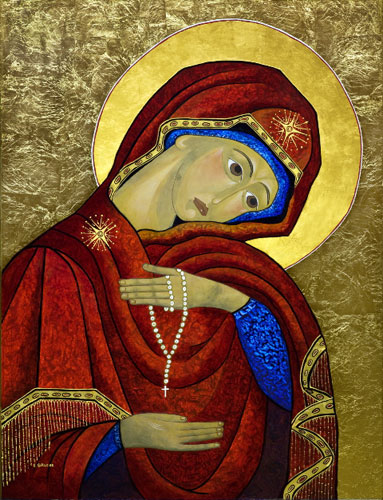 "May the Virgin Mary, Queen of Peace,
intercede for all humanity,
so that hate and death never have the last word!"
~ St John Paul II
Posted by Janette at 4:45 AM