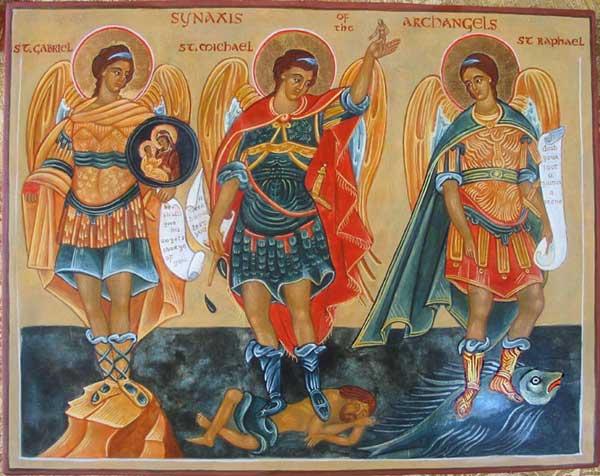 We speak of nine orders of Angels, because we know, by the testimony of Holy Scripture, that there are the following: Angels, Archangels, Virtues, Powers, Principalities, Dominations, Thrones, Cherubim and Seraphim. It must be realized that "Angel" is the name of their office, not of their nature. For the holy Spirits of the heavenly homeland are always Spirits, but they cannot always be called Angels; they are Angels only when they are announcing something. Those who announce less important things are called Angels, and those who announce the highest things are called Archangels. And so not any Angel but the Archangel Gabriel was sent to Mary; for this ministry, it was fitting to have the highest Angel, since he was to announce the greatest news of all. These Archangels are also given special names to describe their particular virtue. For Michael means "Who is like to God?" Gabriel means "Strength of God," and Raphael "Medicine of God."
Whenever something is to be done needing great power, Michael is sent forth so that from his action and his name we may understand that no one can do what God can do. Hence that old enemy who through pride desired to be like God is shown at the end of the world, left to his own strength and about to undergo the final punishment, as destined to fight with Michael the Archangel, as John says, "There was a battle with Michael the Archangel." Similarly, Gabriel was sent to Mary; he who is called "Strength of God" came to announce Him who deigned to appear in humility to conquer the powers of the air. And Raphael is interpreted, as we said, "Medicine of God," for when he touched the eyes of Tobias to do the work of healing, he dispelled the "night of his blindness."

St Michael, St Gabriel, St Raphael, pray for us
and defend us in battle!
Posted by Janette at 4:45 AM