In 1975,  Francis Xavier Cardinal Nguyên Van Thuán  (+ 2002) was arrested by the Communist government of  and imprisoned for thirteen years, nine of them in solitary confinement.  He was finally exiled from  in 1991.  This is an excerpt from one of his books, Five Loaves and Two Fish (pgs 37-39).  Yesterday (7/07/18) another excerpt from the same book was featured...

“We had weekly indoctrination sessions in which the whole camp had to participate.  During our break, I and my Catholic companions took advantage of the opportunity to pass to each, or to the other four groups of prisoners, the little container that held the Blessed Sacrament:  they all knew that Jesus was among them, He who could heal all their physical and mental suffering.

At night, the prisoners took turns for adoration; Jesus helped us in a tremendous way with His silent presence.  Many Christians regained the fervor of their faith during those days, and Buddhists and other non-Christians converted.  The strength of Jesus’ love is irresistible.  The darkness of prison became light; the seed germinated underground during the storm.

Every time I offer Mass I have the opportunity to extend my hands and nail myself to the cross with Jesus, to drink with Him the bitter cup.  Every day, praying and hearing the words of the consecration, I confirm with all my heart and with all my soul a new covenant, an eternal covenant between me and Jesus, through His Blood mixed with mine (cf.  Cor 11:23-25).”

Francis Xavier Cardinal Nguyên Van Thuán
Five Loaves and Two Fish
Other books by Cardinal Van Thuán:  The Road of Hope,
Testimony of Hope and Prayers of Hope,Words of Courage 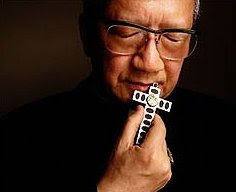