“Love our Lord Jesus Christ
in the Eucharist
above all things in the world.”
St. John of God
Portugal (1495-1550)
Religious, Founder of Hospitallers
Patron of Heart Patients
His motto: "Labor without stopping.
Do all the good works you can while you still have the time."
Feast Day  - March 8 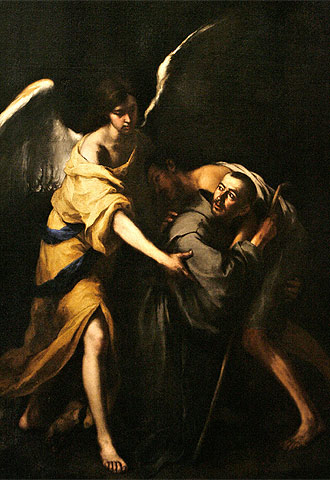 St. John was a holy youth and spent the first part of his life as a shepherd.
As a young man he joined the military and veered from his faith, but later
converted and dedicated his life totally to God. He opened his own hospice and
called it House of God.  He understood that love has a healing and therapeutic value
for those who suffer, and this became his mission. St. John organized his followers
into the Order of Hospitallers, now better known as the Brothers Hospitallers
of St. John of God, who care for the sick in countries around the world.
St John died at 55 years of age on March 8, 1550 of pneumonia,
after he had plunged into a river to save a young man from drowning.

Ste John of God, ora pro nobis!
Posted by Janette at 4:45 AM