"Nothing created has ever been able to fill the heart of man.
God alone can fill it infinitely." - St. Thomas Aquinas

In 1875 Fr Sharbel was granted permission to live as a hermit nearby his monastery at St. Peter and Paul hermitage. His 23 years of solitary life were lived in a spirit of total abandonment to God.
Sharbel's companions in the hermitage were the Sons of God, as encountered in the Scriptures and in the Eucharist, and the Blessed Mother. The Eucharist became the center of his life. He consumed the Bread of his Life and was consumed by it.

Though this hermit did not have a place in the world, the world had a great place in his heart. Through prayer and penance he offered himself as a sacrifice so that the world would return to God. It is in this light that one sees the importance of the following Eucharistic prayer in his life:

"Father of Truth, behold Your Son a sacrifice pleasing to You, accept this offering of Him who died for me..."  On December 16, 1898 while reciting the "Father of Truth" prayer at the Holy Liturgy Sharbel suffered a stroke. He died on Christmas Eve at the age of 70. Through faith this hermit received the Word of God and through love he continued the Ministry of Incarnation. 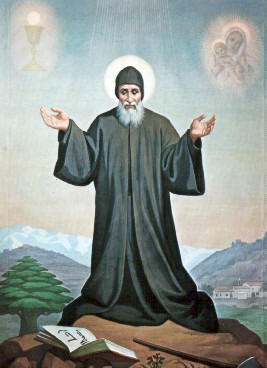 When Sharbel was canonized (1977), Bsp Francis Zayek, head of the  Diocese of St. Maron,
wrote a pamphlet entitled “A New Star of the East.” Bishop Zayek wrote:


“St. Sharbel is called the second St. Anthony of the Desert, the Perfume of Lebanon, the first Confessor of the East to be raised to the Altars according to the actual procedure of the Catholic Church, the honor of our   , and the model of spiritual values and renewal. Sharbel is like a Cedar of Lebanon standing in eternal prayer, on top of a mountain.”