The heavens praise your wonders, O LORD, your faithfulness too,
in the assembly of the holy ones. - Psalm 9:10 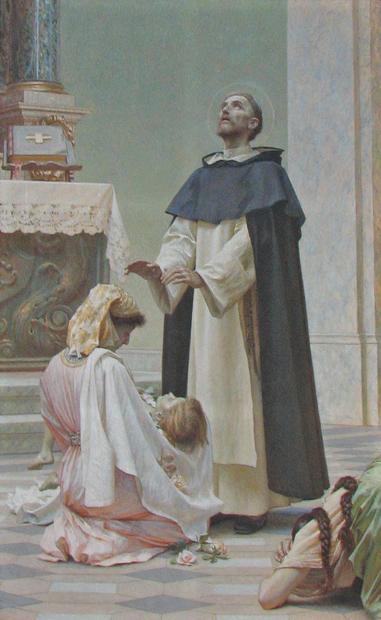 The Miracle of Saint Dominic

"During the ceremony of profession of the nuns of St Sixtus, there was a great excitement and a call for the saint to come out, since the nephew of one of the bishops who was acting with him in this case had just been thrown from his horse and was lying dead in the square outside. ...The body of the young man was brought in, badly mangled from the accident, and laid at the feet of the saint.  Dominic ordered them immediately to remove the body to another room.

Once more life came back at his request; this time after he had offered the Holy Sacrifice.  Bystanders testified that during the Mass they had seen him raised above the ground.  There were hundreds of witnesses to the miraculous answer when he spoke to the dead youth and commanded:  "Young man, I say to thee arise."  The youth rose up joyful and with no sign of injury and was restored to his family.  This miracle was instrumental in bringing into the (Dominican) Order two of its most famous sons; they were the brothers, Hyacinth and Ceslaus, and were later to win great renown as the apostles of the North."

"Arm yourself with prayer rather than a sword;
wear humility rather than fine clothes." - St Dominic

"We must sow the seed, not hoard it." - St Dominic


"St Dominic responded when ... He heard his Master call ... And truly lived a pious  life ... With charity to all ... The holiest of friars who ... Were living in his time ... He fought against the ravages ... Of heresy and crime ... He founded the Dominicans ... And taught them prayer and fasting ... And that humility which leads ... To glory everlasting ... One day when he was rapt in prayer ... And dwelt on God’s commands ... Our Lady came to him and placed ... The Rosary in his hands ... And so today each bead we say ... For all the poor and sick ... Should be in loving memory ... Of good St Dominic.

From Poem Portraits of the Saints, James J Metcalfe (1956)