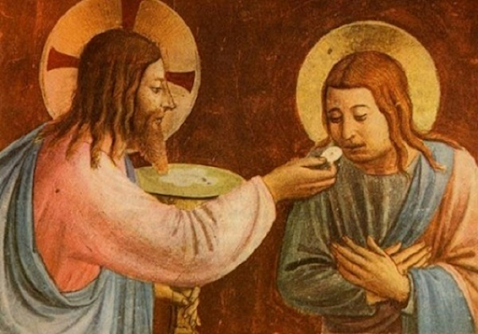 "For the reception of Christ's Body and Blood
does nothing less than transform us
into that which we consume, and henceforth
we bear in soul and body Him in whose fellowship
we died, were buried, and are risen again."
St Leo the Great
Italy ~ 395-461
Pope, Doctor of the Church
"Doctor of the Church's Unity"
Elected Pope unanimously altho still a deacon
Presided at Council of Chalcedon
Eloquent writer, homilist
Feast Day - November 10 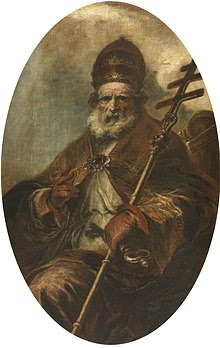 In the year 452, Attila the Hun, having with remorseless cruelty sieged, burned, sacked and destroyed Aquileia -­ the city in northeastern Italy at the head of the Adriatic Sea ­- was as close as Mantua, on his march to Rome. He was boasting, as he advanced, that the total conquest of  was to be his crowning work of destruction. Rome was the dowry which he planned to present to his bride, Honoria, the granddaughter of the great Theodosius!

All  awaited the coming of the Mongol King in hopeless terror. They had no defense left against him. And then, in the darkest hour ­- as would often be the case through the centuries ahead ­- the  was saved, not by its legions, its tribunes, its senators, or its suffering citizens. Rome was saved by its Bishop, the Holy Roman Pontiff.

Practically alone, Pope Leo went out to meet the wanton murderer who was the terror of the world. He climbed steadily northward, this holy and august Vicar of Christ, and over the mountains, an arduous journey indeed in those days. He found the Mongolian chief below , at the point where the , flowing down from its Alpine source ­- the beautiful Lago Garda ­- emptied itself in the . Attila's troops, hardened veterans seasoned in plunder and sack and rape, were ready and waiting to cross the Po when Saint Leo, in his papal robes, entered the disordered camp and stood before the King of the Huns.
The glorious Pope threatened Attila with the power which was his from Peter, the Prince of the Apostles, if he did not turn back and leave  unmolested. And it is one of the most dramatic, of all the dramatic facts with which the story of the Church is so enchantingly full, that Attila, the Hun, yielded before Leo, the Pope. The "Scourge of God" agreed to turn back. He gave up . And Leo, absorbed in thanksgiving, returned to his See.

Attila's servants, so the story is told, asked him why he had reversed his custom and capitulated so easily to the Bishop of . The brigand chief answered that all the while the Pope was speaking, he, Attila, the generator of terror in others, was himself consumed in fear, for there had appeared in the air above the Pope's head a figure in the dress of a priest, holding in his hand a drawn sword with which he made as if to kill him unless he consented to do as Leo asked. The figure was that of Peter!"

When one visits the  today one will see this scene depicted in art hanging over the casket of St Leo in . One will see the terror, fear and dread on Attila's face and the fearless Leo confronting him with total trust in God. The Meeting between Leo the Great and Attila ~ Raphael 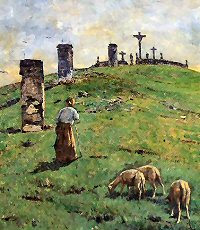 EVERY DAY in NOVEMBER
Plenary indulgence applicable to
the Souls in Purgatory
READ and RESPOND:
How to Gain a Plenary Indulgence for Souls in Purgatory Amid Pandemic, According to Vatican Decree |
Let us empty Purgatory!
Posted by Janette at 4:45 AM