Christ made her heart His Heart

"Christ Jesus had stolen the heart of Rita –
He alone possessed it.  He made her heart His heart;
and under the white veils of the Eucharist He was for her soul,
as He is for all loving hearts, heaven upon earth. 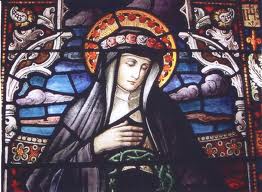 The saint of Cascia belongs to the great host of Christian women who "have had a significant impact on the life of the Church as well as of society" (Apostolic Letter Mulieris dignitatem, n. 27). Rita well interpreted the "feminine genius" by living it intensely in both physical and spiritual motherhood. " ~ Pope Blessed John Paul II

St Rita was a stigmatist who suffered a wound of Christ on her forehead. Her incorrupt body, which for several centuries gave off a sweet fragrance, is preserved in a shrine in .  It is said that at her beatification, the body of the saint raised itself up and opened its eyes. St. Rita is called "The Saint of the Impossible" and is particularly invoked in cases of matrimonial difficulties.
Posted by Janette at 4:45 AM