FEAST* of the CONVERSION of ST PAUL
January 25
*This feast is at the conclusion of the Week of Prayer for Christian Unity, an international Christian ecumenical observance that began in 1908, which is an octave spanning from January 18 (observed as the Confession of Peter) to January 25. 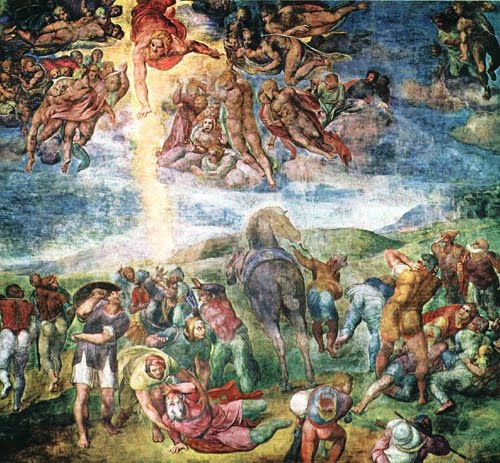 The Conversion of Saul -- Michelangelo di Lodovico Buonarroti Simoni
"To be converted means, also for each one of us, to believe that Jesus “has given Himself for me”, dying on the Cross (cf. Galatians 2: 20) and, risen, lives with me and in me. Entrusting myself to the power of His forgiveness, letting myself be taken by His hand, I can come out of the quicksands of pride and sin, of deceit and sadness, of selfishness and of every false security, to know and live the richness of His love.”

“One who thirsted eagerly for God was Charles de Foucald whose prodigal and shocking way of life provoked so much gossip in Paris that he was the butt of violent jokes among French soldiers.
Born September 15, 1858, of fabulous wealth, at one point of his shady life he stated:  ‘I was so completely selfish, so completely vain, so completely irreligious, and utterly given over to wickedness, that I was only one step away from insanity.’
God seemed to him to be infinitely remote – if He existed at all!  He used to enter in , repeating over and over ‘My God, if You exist, let me come to know You.’
One day, as a priest elevated the Consecrated Host, he was overheard to say: ‘My God, You are real!’
‘In a single instant,’ he said, ‘my heart was touched and I believed.’
The Eucharist, until his death, dominated his whole life.  To stir others to seek and find God dwelling in the tabernacle that they too may be touched to the quick, share in his discovery, and come home to the Creator, ‘that Power which erring women call chance,’ he composed this prayer:
Oh Jesus present in the Blessed Sacrament in our churches, You give us faith, hope, love and hospitality.  You build for us an inner retreat, an ardent repose.  Help us to seek You and find You in the tabernacle."
From Hidden Treasure:  The Riches of the Eucharist
(Louis Kaczmarek)
St Paul (and St Charles),
ora pro nobis!
Posted by Janette at 4:45 AM