Ever present, as He said...

Going on from there, he saw two other brothers, James son of Zebedee
and his brother John.  They were in a boat with their father Zebedee,
preparing their nets.  Jesus called them, and immediately they left
the boat and their father and followed him. - Matthew 4:21, 22

In like manner, as we see bread and wine with our bodily eyes, let us see and believe firmly that it is His Most Holy Body and Blood, True and Living.

For in this way our Lord is ever present among those who believe in Him, according to what He said: "Behold, I am with you all days even to the consummation of the world" (Mt. 28, 20). 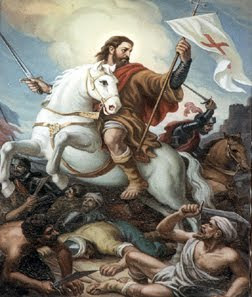 "Accept the help that the Virgin and the saints offer you.
Promise that you will press forward
on your way to join them."  ~  St Francis de Sales
Click here: St. James the Greater - YouTube (2 mins)