St Norbert, defender of the Eucharist! ...

"You will never enjoy the sweetness of a quiet prayer unless you
shut your mind to all worldly desires and temporal affairs." - St Norbert 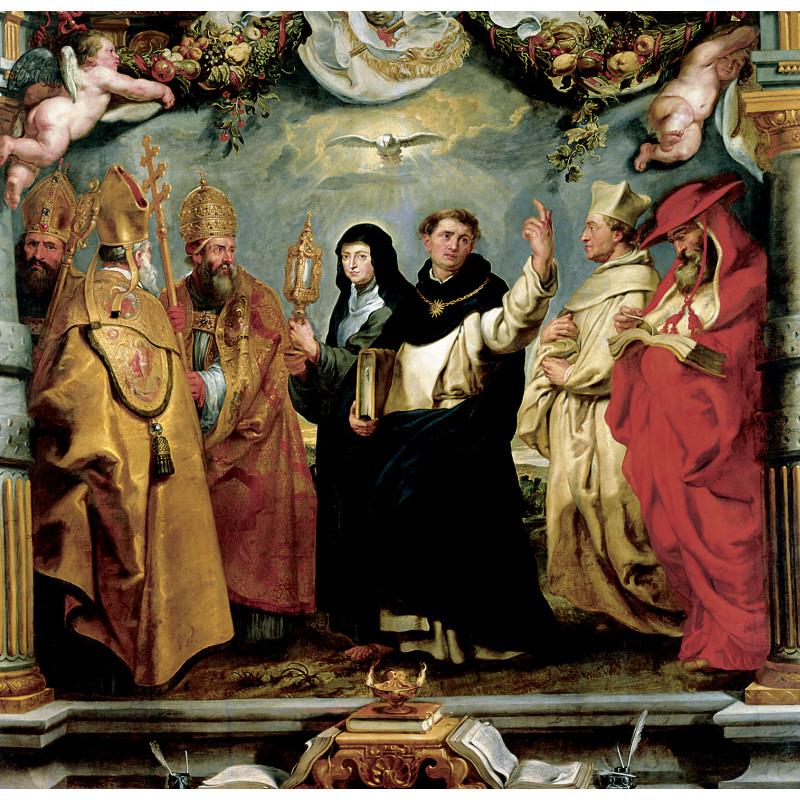 The Defenders of the Eucharist ~ Peter Paul Rubens (1625)

In the sixteenth century, the denial of the Real Presence occurred again, along with a repudiation of the Mass as making present the redemptive sacrifice of Jesus. The Church’s response through the Council of Trent strongly reaffirmed these Eucharistic truths and sponsored the revival of Eucharistic devotions initiated in the Middle Ages.

Perhaps the greatest Eucharistic artwork from this period is Peter Paul Rubens’s oil painting entitled The Defenders of the Eucharist, created in 1625. Rubens reached back to the golden age of the Church Fathers as well as to  outstanding saints of the Middle Ages and assembled seven of them in one scene, united in the one faith of the Church witnessing their unity through the centuries of faith in the Eucharistic presence of Christ.  Today that painting is on display in the Ringling Museum of Art in .

Beginning on the right side of the canvass, Rubens pictures , dressed as a cardinal receiving Communion. Next to him stands St. Norbert, clothed in his white habit and carrying the Eucharist beneath his robes. St. Thomas Aquinas stands in the center holding a book and extending his other hand to heaven, a gesture proclaiming his defense of the Eucharist. Beside him is St. Clare of , holding a monstrance that displays the sacred Eucharistic host. To her left is St. Gregory the Great, the pope who wrote so many works contained in the  Then comes St. Ambrose, who wrote about the Real Presence of Christ in the Eucharist. Rubens finishes his gathering of defenders of the Eucharist with , who included his reflections on this sacrament in his famous treatise on the Holy Trinity.

Rubens produced this painting during the Church’s Counter-Reformation efforts to defend and reclaim the authentic teachings about the Eucharist and the devotions that assisted believers to deepen their commitment to this mystery of faith.

The seven saints represented in this painting summarize our belief in the Eucharist. It is a sacrifice, the sacrifice of Jesus made present in a sacramental way. It is a sacrament of the abiding presence of Christ in the transformed bread and wine become his Body and Blood. It is a sacramental meal begun on Holy Thursday and available to us in Holy Communion.
This sacrament is available to members of the Catholic Church who are in the state of grace. It is a transforming sacrament. The term “transubstantiation” means that the substance of bread and wine is changed into the substance of Christ’s Body and Blood. In receiving Communion, we too undergo a gradual transformation into Christ and are called to spread His love given to us throughout the world.

Excerpt of Text from article: The Saints and Eucharistic Devotion
by Norbertine priest - Fr. Alfred McBride 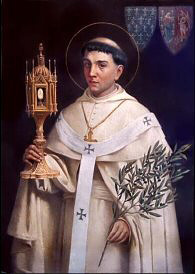 On the occasion of his ordination to the priesthood, Norbert said,

What then are you? Nothing and everything. O Priest!
Take care lest what was  said to Christ on the cross be said to you:
'He saved others, himself he cannot save!'"