"This day has been made holy by the passion of the blessed apostles
Peter and Paul. ... These martyrs realized what they taught:
they pursued justice, they confessed the truth, they died for it."
- St Augustine, Sermon 295

We do not preach ourselves but Jesus Christ as Lord,
and ourselves as your slaves for the sake of Jesus. - 2 Cor 4:5 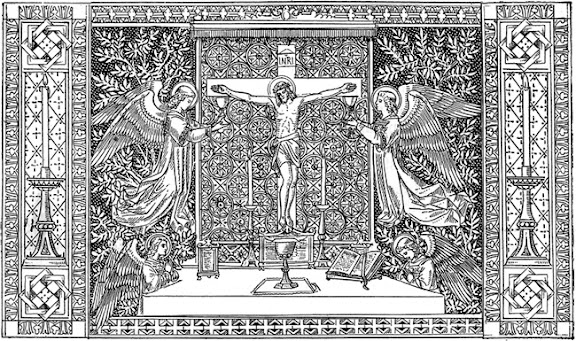 These are the ones who, living in the flesh, planted the Church with their blood; they drank the chalice of the Lord and became friends of God.

Prayer over the Offerings (Today's Liturgy)

May the prayer of the Apostles, O Lord, accompany the sacrificial gift that we present to your name for consecration, and may their intercession make us devoted to you in celebration of the sacrifice.
Through Christ our Lord.

Grant us, O Lord, who have been renewed by this Sacrament, so to live in the Church, that, persevering in the breaking of the Bread and in the teaching of the Apostles, we may be one heart and one soul, made steadfast in your love.
Through Christ our Lord.

Sts Peter and Paul, pray for us!

*Sts Peter and Paul: the principle pillars of the Church founded by Christ.
St Peter was chosen by Christ to be his first Vicar on earth; he was endowed with powers of the keys of the kingdom of heaven (Mt 16:13-19) and charged with the role of Shepherd of Christ's flock (Jn 21:15-17). In St. Peter and his successors, we have a visible sign of unity and communion in faith and charity. Divine grace led St. Peter to profess Christ's divinity.   Peter suffered martyrdom by crucifixion under Nero, in about the year 64 AD. He was buried at the hill of the ; recent excavations have revealed his tomb on the very site of St. Peter's Basilica.
was chosen to form part of the apostolic college by Christ himself on the road to  (Acts 9:1-16). Selected to bring Christ's name to all peoples (Acts 9:15), he is the greatest missionary of all time, the advocate of pagans, the Apostle of the Gentiles.  was beheaded in the Tre Fontane along the Via Ostiense and buried nearby, on the site where the basilica bearing his name now stands. Source: Daily Roman Missal, Edited by Rev. James Socías, Midwest Theological Forum, Chicago, Illinois ©2003
Posted by Janette at 4:45 AM